Microsoft is doing a huge effort to bring SQL Server 2016 to Linux. Back in the summer, during the Dublin 2016 SQL Saturday #501, Mark Souza presented the SQL Server history. One of the major features is the ability to run SQL Sever 2016 on Linux.

Since then I added on my TODO list a simple task, test SQL Server in Linux. The best way to do it is using a Docker container, provided by Microsoft. Plus, since the last time that I played with Docker in Windows, they run on Hyper-V instead of VirtualBox. For me this is a huge increment in the product, thus we do not need several virtualization technologies on my development machine.

After installing the latest version of Docker (at the time of this post is 1.12.5), I start to read the notes on how to run the SQL Server Docker container. The first thing that jumped was this instruction:

Especially the port assignment, since I’ve SQL Server installed on my development machine using the standard port 1433. I’ve modified the instruction to be:

Where I assigned the public port 7000 to the container port 1433 (SQL Server default), and the container will persist the files in my file system at C:\Temp\Docker\mssql. 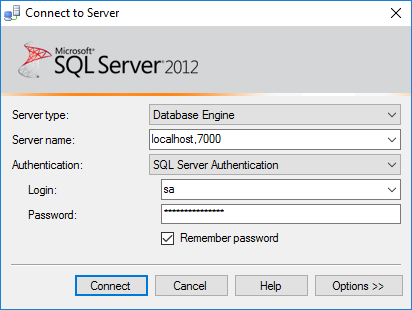 After I connect just run the famous command:

and get the results:

I’ve played around for a few hours, and it is a good candidate to start the test for a production environment. I’ve tried a few applications and all of them worked without any problem. Good work SQL team, keep them going!